Top 5 Places to Ride Your Electric Longboard in Vancouver

Places to ride in Vancouver

It’s no secret that the electric longboard and PEV (personal electric vehicle) scenes in Vancouver are growing. What was once a small community in riders is now a diverse community with electric skateboard riders of all ages and backgrounds.

Add the fact that there is a beautiful city like Vancouver to explore and wander which leaves a question open that many new riders and visitors ask. “Where are the best places to ride an electric skateboard in Vancouver?”

Although the options here can be endless and there are many places to be explored, I’ve listed the top five places and routes across Metro Vancouver to check out with your electric skateboard.

Before we get into it, I have to give a shout-out to the Vancouver ESK8 group for their suggestions and help on this.

Central Valley Greenway is great for urban and street riding while still providing plenty of paved paths for your electric skateboard to cruise on. The great part about this route is that it not only covers a vast span of the entire lower mainland, but it also connects with major transportation and Skytrain routes so you don’t have to worry too much about range.

The route provides countless options to hop on and off of public transit as well as check out differing neighbourhoods along the way. This route is great if you plan to go riding with a friend and make a day out of it.

There are ample opportunities to find charge spots or take a break at a local cafe. The entire route will take you through New Westminster, Burnaby, and Vancouver and has a nice dynamic transition of scenery as you ride your electric longboard.

You will be pleased to follow alongside the river in New West, cruise through parklands and greenery in Burnaby, and cross through pockets of neighbourhoods and urban developments as you head into Vancouver.

Of course, like most routes, you can start anywhere. I suggest using New West as the starting point as you’ll be able to access more areas to ride once your electric skateboard glides into Vancouver.

The Arbutus Greenway is great for a quick cruise with your electric skateboard. This one is especially good for electric skateboards that have a limited range. The entire route is 9km, but the beautiful part about this route is that it allows you to branch off into nearby neighbourhoods that can lead you to various other paths and routes.

In exploring this route you may find yourself diving into unknown and unexplored areas of the city you would otherwise not encounter. This route stretches from south Vancouver to the edge of Kitsilano, making it also ideal for a nice coffee run with a friend or a light cruise on a warm day.

The route may be short to some, but you can always ride end to end and back again which doubles the route’s distance to 18km. However, you can also just head towards the city centre and continue onwards towards the sea wall for an extended ride through Stanley Park.

Photo by: Aaron Do

This is one of my favourite routes for various reasons. It’s fairly close to my neighbourhood which makes it easy to get to. It is also easily accessible via Skytrain or public transit as the route begins at Lake/Douglas Station in Coquitlam.

I enjoy circling around the entire park or the lake a couple of times before continuing on the route towards David Avenue (A long stretch of road with a gradual incline). Please note that there are also electrical outlets available throughout the park and on the ground just inside the Skytrain entrance which is another bonus.

Once heading north from the park to David Avenue you will note that the bike and walking path continues on one side of the road (shortly after riding a small portion of sidewalk). This path extends for over 4km uphill, covering a vast greenspace and neighbourhoods along the way.

However, you can regenerate on your way down the mountain regardless of which route you do take. What I love most about this route is that nearly the entire route is bike lanes or paved paths which are never crowded.

Did I mention that the paths and bike lanes are also fairly pristine throughout the route with very few areas of bumps and cracks? It’s also worth mentioning that the bridge along David does have a gap and you should be careful going over that portion as it can be known to toss riders from their electric skateboards.

The long gradual incline is great to cruise on with the electric skateboard and doesn’t cause your electric skateboard to overheat or overwork. However, keep in mind if you are using belt drives you will more than likely want to have spares on hand.

Photo by: Aaron Do

If you are looking for pure nature and an escape from the city then you’ll want to take your electric skateboard over to the Seymour Demonstration Forest multi-use trails. This is probably the most epic route to cruise your electric skateboard through as it is roughly 20km of smooth paved paths that slide between the forested area surrounding the lower portions of Mount Seymour.

The beautiful part about this route (other than being surrounded by nature) is the fact that the path is smooth and fairly wide. It also doesn’t seem to have much foot traffic and has a great blend of slight inclines and curves married together with flat and long straightaways.

Keep in mind that finding anywhere to charge here may be difficult and you will not be close to any local cafes or stores. Make sure your batteries are charged up and your electric skateboard is all tuned up before heading to this location for a ride. 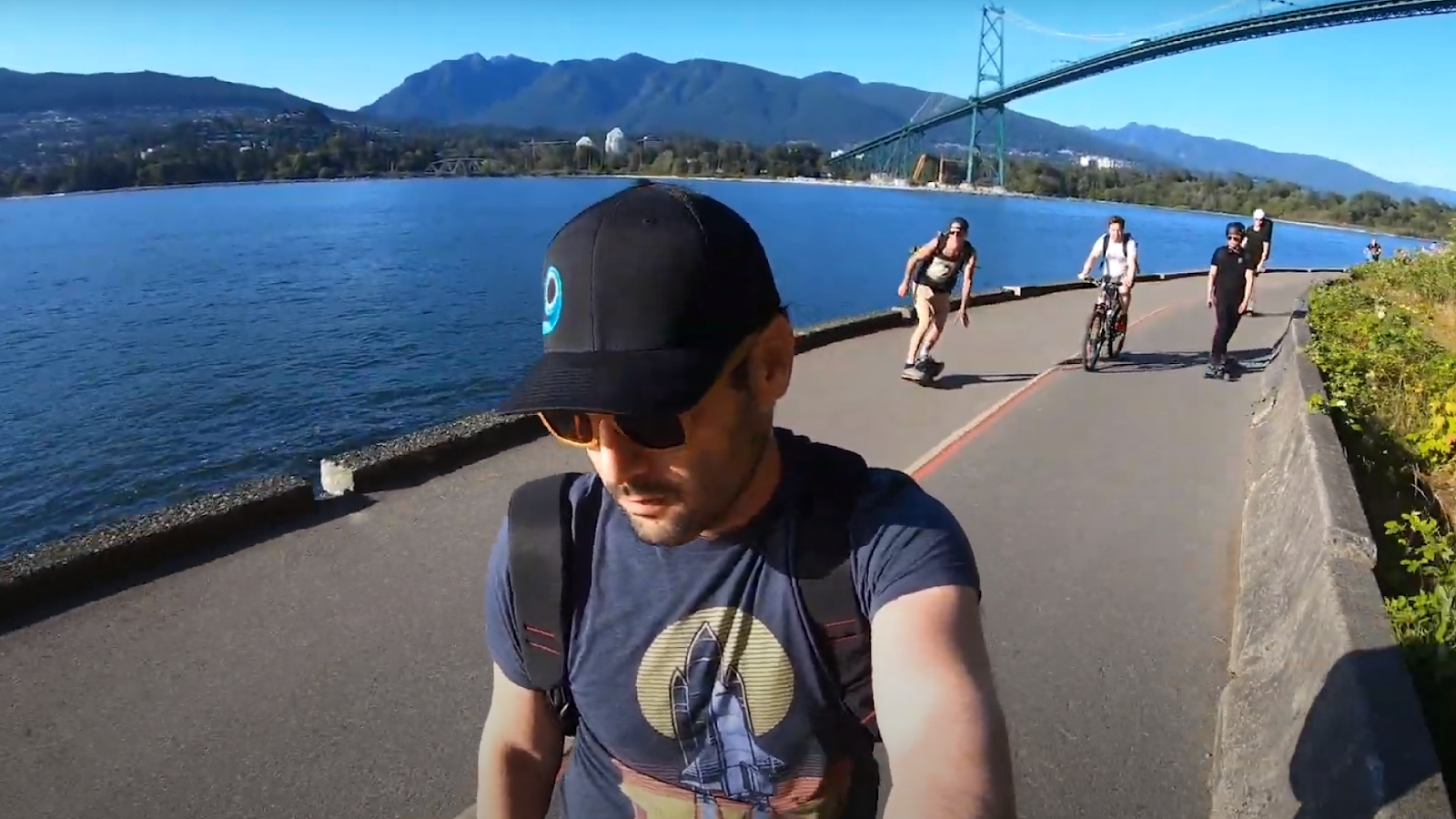 Most locals would agree that whether you are walking, cycling, or cruising on your electric skateboard the seawall is the place you want to be. Spanning 28km of seaside greenway this is an uninterrupted path that extends from the Vancouver Convention Centre through Stanley Park and onwards to Spanish Banks Park.

What I love most about this route other than the beautiful scenery that skirts outside of the downtown core is the relaxed ride that is seemingly endless on the electric skateboard. But with all good things, there does come some bad.

For one there are very few charge spots throughout this route. This specifically does become a problem for some low-range electric skateboards when it comes to the Stanley Park and English Bay portion.

If your electric skateboard is unable to make it between those distances then you will likely run out of power before you reach English Bay. Another downside is that it can get busy along this entire route and there are areas of bottleneck or parts where the path is not wide enough to pass ahead of slower riders.

Don’t expect to shoot down these paths going over 30km. Although there are areas where you will be able to test the power of your electric skateboard, most of the route is too populated for speed demons.

After a long-anticipated wait, Summit XT is here! This high-performance e-board has some crazy specs and a lot of similarities to our Summit model. So

Get More Range With Our Updated Boards

This year we’ve updated our electric mountainboard with some new components and new batteries. We’ve also made some changes to the bindings on the MTN